I don't usually do repair work on vintage clothing because, quite frankly, it's more trouble than it's worth, (for someone like me who enjoys making things from scratch). I'm also far from a professional when it comes to these things.

One of my camp friends asked me to see what I could do to save her "1890 Persian Buffalo coat" and for some insane reason I agreed.
Said coat sat in a pillow case on my shelf awaiting it's turn for a few months & didn't stink too badly... Then the docket was up & out of the sack it came.

Now... for a very good restoration, one should separate the fur from the lining, make all necessary repairs to the hide, fur & seams, matching & patching with fur as close as one can get; then repair the lining and stitch everything back together. Critical seams (armholes, etc.) should be reinforced with twill tape or similar fabric.
This was not to be.
First, there were past repairs that were quite sound & stitched right to the lining.
Second, time constraints & cost concerns prevented this approach.

So, the plan of action was this:
Find leather of a nice color & patch from behind the fur, saving as much of the fur as possible & make the coat wearable & look good. No major changes, no overhauls.

Leather found (split elk in a beautiful cinnamon brown) with too many flaws to use for anything else.
Damage assessed & diagramed (10 major holes or splits in the hide with about 10 more minor ones).
Patterns for patches made (cut paper & numbered with directional indicators; up down, front, back).
Leather bits traced & cut.
Let the patching begin!

My main concern was that the shoulders were completely blown out. Most of the leather along those seams was rotten or so damaged by past repairs that it was not salvageable... an entire patch about 12" long & 4" wide was missing from the left shoulder. The right was completely shredded. The shoulder seams were reduced to thread & powder.

Various holes & splits threatened to undo the garment at the least movement... but the leather was, for the most part, sound. It was being held together by a lovely orange embroidery thread, green cotton thread, tan button-hole thread and, of all things, fishing line!

I removed one "repair" and rotten bit at a time, so the coat stayed mostly intact throughout the process.

Starting with the left shoulder, I pinned in the patch, stitched it on with running stitches near the outer edge of the patch & then whip stitched the fur edges so they laid flat.
Next, I patched holes across the shoulder & neck seams; mostly by whip stitching with huge Frankenstein whip stitches to keep tension to a minimum & grab as much material as I could.
Repaired the splits under the arms.
Reinforced the armholes on the body side with leather & tacked the padding back onto the fur so the shoulders regained their beautiful shape!
Laid the sleeve cap over the shoulder & stitched it on (again with big ol' Frankenstein stitches). Made sure it was sound & pulled the hair up to cover the threads. 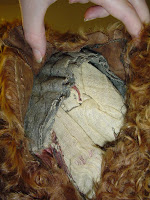 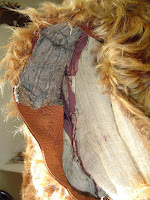 The right armhole was a bit trickier (the whole right side of the coat is dry rotted). At first I thought it was in better condition than the left, but once I removed the excellent fishing line repairs (they really did hold it together well), the utter devastation became apparent. Everything was crumbling. The whole right sleeve was in the process of blowing out, the leather was cracking & splitting. 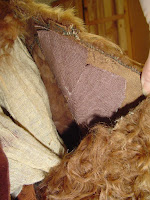 Because the leather couldn't handle twill tape stitching I thought "what about band-aids?" (fabric & glue). Looked it up & figured it was worth a try. So I cut linen patches to size & using fabric/fiber/plastic/metal/etc. "not sensitive to heat or cold!" glue made myself some long-lasting band-aids for this poor beleaguered sleeve. After the first 2 patched dried & I had carefully repaired the armhole on the coat body, I thought "this just might work!"
The sleeve cap was in danger of shredding with another hole & I just couldn't see it standing up to having thread pulled through it. So I glued pieces of linen bias tape along the edge to stabilize that too.
Moving on while that drys.

The bottom fronts both had L tares. The first was a simple patch & whip. The other was in similar condition to the sleeve: "band-aid" and let dry. Amazingly enough after the glue had dried I was able to just whip the tares together & no patch was necessary... though I think this might qualify as a "patch & pray."

Right armhole was stitched back together (the glue made the leather a little stiff, but not bad at all), small whip stitched repairs in the cuff, chest & belly were made & Ta-Da! Finished coat...

It's now in the "freezer" (the van at 20F) for 3 days to kill any mites, after which time it will become well acquainted with fresh coffee grounds to make it smell much better. 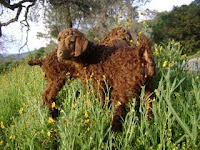 (if these are your -- very cute-- angora goats, I want some to eat my weeds... and if you'd like me to remove the images I will. Got them from Flicker & didn't have any notices that they were copyrighted. But seriously, I could use some goats to combat the weed issue... and they are cute). 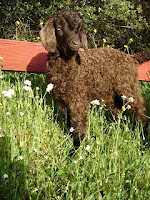 It has elastic inner sleeves to keep the cold air out, which was done starting in the late 20's and continued into the 1970's... why, oh why, have they stopped doing this??? Even though the fabric doesn't match, it's original to the garment.
The collar is very much in the style of the late 20's & 30's, (vs. the stand-up, huge, fun shapes of the previous decades).
The shoulders have the delightfully squared off look of the late 20's & 30's, but not quite the blocky solidness of the mid-1940's. 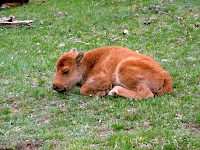 The American Bison was nearly extinct by 1884, with an estimated 500 individuals roaming free. By 1890 there were a few select ranchers breeding captive herds to preserve the species, but their hides were not routinely used for garments at this time... however, there were literally 100,000's of tanned hides stockpiled in warehouses throughout the US & Canada. Now, it's possible that a few of these (30 or 40 yr. old) hides were used to make this coat, but that is unlikely.
(isn't he cute? If this is your --really cute-- image & you'd like me to remove it, I will. I got it from Flicker & it didn't yell at me).

Many thanks to Darlene, Barbara, Carol & Betty for helping me brainstorm about what kind of fur this was & when the coat was made.
Posted by Gail Kellogg Hope at 2:16 PM 2 comments: