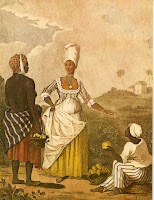 The question of late 18th c. women's jackets has come up on several blogs & discussions, and rather than Over-Post my findings in their comment sections, I'll post them here.

The results of my search are murky & not as overwhelmingly positive as I'd like, but I think we have a definitive "yes, jackets were worn in America" if we properly define "jacket."

A "jacket," by my definition (and backed by several written sources) is similar to "sweater" in terms of the broad use of the word.
Ex:
a sweater can be a
pullover,
cable knit,
cardigan,
vest,
v-neck,
turtleneck, etc.
Just as a jacket can be a
shortgown,
bedgown,
or even occasionally, pet-en-l-aire
waistcoat, (what reenactors improperly call a "bodice")
Brunswick style (with it's 12 names, but Irish Hood seems to be the preferred NY tag),
caraco (which just means "jacket", please stop calling it a "caraco jacket", but it is a specific cut)

BUT, for just a moment, I'm looking specifically for the jacket that Hallie Larkin of At the Sign of the Golden Scissors is talking about, which is a fitted back garment with front closure (either stomacher or straight) and skirts (either attached or separate seam) to no lower than mid-thigh level. If you aren't familiar with her blog, go read it. She is conservative in her research & refreshingly picky with her terms. (if you haven't figured it out, I'm a generalist).

I've found several written references to women wearing jackets, and a one example of an imported jacket that was owned by an American woman.

"Miss Patty Parsons, cut up the embroidered sky blue satin waistcoat which had been worn by her grandfather at the English court, and who fashioned therefrom a "jockey" which was deemed "wondrous becoming." 1775, America (probably Philadelphia)
"A troopers scarlet coat was made into a beautiful jacket for a fair girl, and from the little pieces cut from the coat-tails, lapels, etc, were fashioned a perfectly fitting pair of warm winter gloves, bound with gray squirrel fur which also furnished a collar and cuffs for the jacket." 1775, America.

However, most seem to be what we would otherwise call shortgowns, bedgowns, and other informal style "jackets." Names mean quite a bit if you can pin them down.

In the Virgin Islands, you can see the widespread use of the shortgown/waistcoat/jacket as the working woman's outfit. No, it's not continental America, but the Virginia slaves & white working class seem to wear almost the same things.
http://www.lennoxhonychurch.com/brunias.cfm

Here are some slave advertisements describing clothing worn when they ran away. I would call the illustration a shortgown or waistcoat, but it also has the very wide neckline & tabs or skirts of a working class "jacket," (illustration).
Outfits of matching fabrics, even if they are a petticoat & top are occasionally called gowns, though in this instance I think it's probably a genuine gown (written).
http://www.accessible-archives.com/2011/05/10-southern-us-slave-advertisements/

It is highly unlikely that we have many working-class jackets, as very few would have survived. The Pennsylvania shortgown survives as it was so prevalent through that area. There is a little debate about how widespread that style was, but there are enough records to support it's use through New England & the Middle Colonies. This particular "jacket" or shortgown was considered quite ugly by recent English immigrants, they were shapeless, often made of homespun & were said to be a single layer of fabric (so the quote says, though surviving examples are often reversible being made of 2 imported printed cottons). 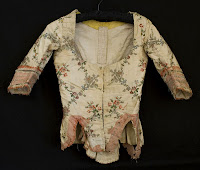 There is a silk Spittalfields jacket of 1780 in rather poor condition (with provenance) that belonged to a woman in VT. Unfortunately I did not note the source of the image, I believe it was an auction site (Vintage Textile?), but it could have been Boston Museum of Art? I kick my years-ago self for not keeping better image records.

The Met has this jacket, which I would call a bedgown, listed as American or European - not definitive. The fabric is most likely European, but the garment assembly could be either.
http://www.metmuseum.org/collections/search-the-collections/80036043?img=0
When the museum doesn't know, causal researchers are in a hopeless bind.

I do think it's important to recognize that very few of the surviving examples of fancier jackets in the French & English style have American roots. The one above is the only example I've ever found that was definitely worn by an American woman, in America - though it was imported from England.
It's also important to remember that immigration has never stopped. People (women especially) did not just dump all their possessions in the Thames & arrive here in the Colonies with nothing but a shift on their backs. Trade, goods, people & their belongings & styles went back & forth across The Pond on a regular basis. Not everyone traveled, and not all the time, but we have enough evidence that we know America did not exist in a fashion vacuum.

This is not to say that I want to see hundreds of silk embroidered fancy jackets at every reenactment from Quebec to St. Croix. Research your fabrics, region, cut of the "jacket", station in life & other assorted necessities. But please don't hesitate to buy a good quality jacket/shortgown/waistcoat/caraco/Irish hood from vendors, or buy a pattern to make your own - as far as I can tell, they are correct for the Colonies and (in some cases) early America.
Posted by Gail Kellogg Hope at 4:09 AM 4 comments: