Fruit of Many Colors: Sumac Berries

Sumac berries are pretty all year long.  I love them.  You can eat them,* birds eat them... they are pretty.  Did I mention how pretty they are?  They are also a horrible weed.  But like most weeds they are quite useful if you know how to use them.
*if you aren't allergic.

Last year I collected quite a few sumac berry torches (that's how I think of them, as these big, bright red torches shining on the trees).  I dried them; planned on using them over the winter... never got to it.  "Now" was a good time, so I soaked them in water overnight & let them sit out in the sun in a big old pot. About 1/2 a peck.

On Day 2 I steeped the pot in warm(ing) water for 30 minutes, boiled for 30 minutes, mashing the lovely things the whole time.... OK, once in a while... at least every 10 minutes or so... until they turned kinda brownish.

Because of the size of the pot, rather than pouring out the mash, I dipped out the liquid & strained the berries out of that.


The recipe I was reading (YES, a Recipe!!!) gave a few different options for these berries.
http://vikland.tripod.com/sumac.html

The first batches were alum mordant on finished yarn, with various soak times & after-mordants like vinegar & ammonia.  I think you can read what the tags say (sorry it's tipped - I have no idea how to fix that on this format).  They ranged from a very nice flax color to golden yellow. 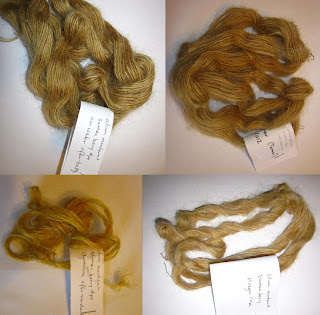 Since I got so much of it, I figured I'd do a few different things.  I liked the idea of a heathered gray, and the best way to get that is to dye the fleece and spin after.

To get gray from sumac berries, you need to soak the wool in an iron after-bath.  To get that, you can either add ferric to the water or keep a plastic canister of rusting nails & just pour out the water once in a while... since I had neither, but plenty of Stuff That's Rusty, I went out & found a bit of junk that would fit in the pot.  Joys of farm-life.
Once I got the liquid free of pretty berries, I wetted some clean fleece in a mesh bag and dunked it in the pot.  (Now a much smaller pot).
Boiled for 30 40 minutes and then transferred to the Iron pot.

I've carded up a bit of it, but haven't started spinning it yet.  I'd like to get the whole chunk in rolags before I spin it.  I am losing most of the light undercoat & very dark tips, which is fine.

Posted by Gail Kellogg Hope at 4:21 AM No comments: