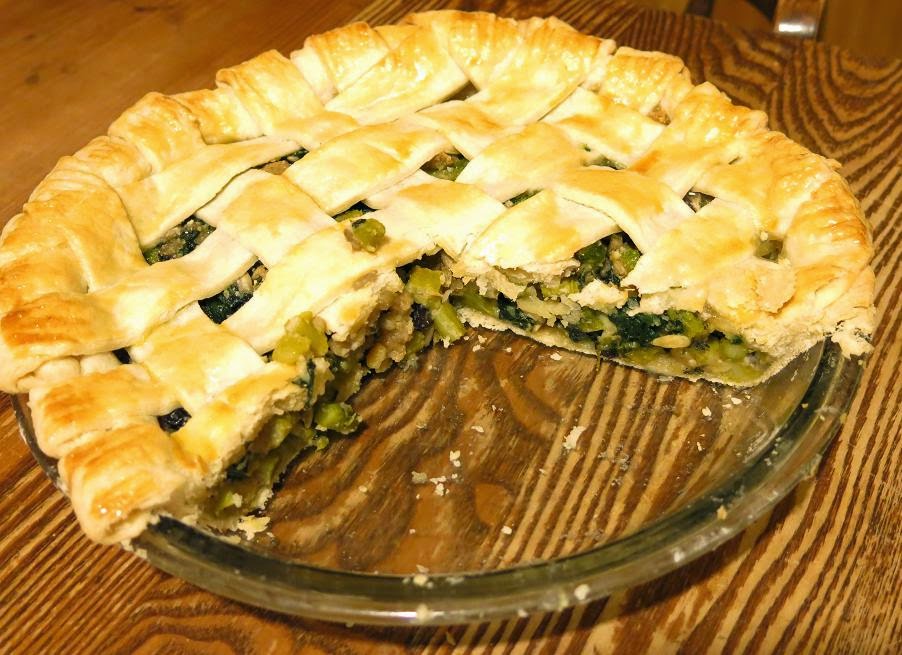 Herb Pot Pie
a redaction from "French Taste in Atlantic Canada, 1604-1758, A gastronomic History"
The book is borrowed... the redaction is borrowed... heck, I borrowed nearly every single ingredient going into this thing!
Since this book doesn't provide the originals I have hesitated to use it, and while I don't question the quality of the authors work, it also doesn't provide much information as to when/where/who a particular recipe was recorded.

1 1/2 portion of pate fine (p 78) - (I "borrowed" my own lard crust as the kid can't eat butter, it's very close to the one listed).
1 egg yolk for glaze
1 lb spinach, arugula or lettuce leaves scrubbed & well dried (baby spinach and asparagus as that's what was green in the fridge)
2 tbsp butter (omitted)
1/2 c. white sugar
1 c. day-old bread without crust, diced
1/2 c. ground almonds
1/2 c. mixed pine nuts & golden sultanas (I used sunflower seeds as I was out of pine nuts - curses! Another substitution! and currants <-- blue="" br=""> 1 tbsp candied lemon peel (aack! I'm out! orange peel, curse it)
1/2 tsp rosewater (are you kidding me, that's gone too?!? orange juice)
1/2 tsp "epices douces du patissier" (p 86) (which is NOT on p. 86, and my french is horrific, so I guessed they were talking about "mild spices for the pastry chef and added a few dashes of the following: white pepper, ginger, cloves, cinnamon & nutmeg in approximate proportions).
Butter for dish (omitted)

This left me wondering if it's even the same recipe because I "borrowed" so many ingredients, some planned, some by accident.
In any case, it was very delicious. Much sweeter than I anticipated, but very, very good.  I like the white pepper with the traditional sweet pie seasonings.

Please note, I was planning on doing a full blue table setting, and pumpkin soup and a few other things for dinner, but my father brought home a new beagle "pup" who led us on a merry chase over frozen fields & icy roads after he slipped his harness chasing a cat. The lady said he was trained. He is not. He doesn't even know his own name. So anyway, I chased a dog vs. setting a delicious table.  He is a very nice dog and loves my kid already, so if all goes well at his vet appt today, he'll be a keeper.
Posted by Gail Kellogg Hope at 9:37 AM